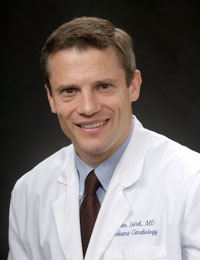 Dr. Penn Laird II was raised in Dallas. After graduating from high school, he attended Princeton University, where he earned a degree in Religion. During both high school and college he was a member of the varsity wrestling team. After college Penn returned to Dallas for medical school at the University of Texas Southwestern Medical School, where he was elected to the Alpha Omega Alpha Honor Medical Society. He completed his residency and fellowship at Texas Children’s Hospital and Baylor College of Medicine in Houston. During his training he served as Neonatology Chief Resident at Ben Taub Hospital. In addition he was honored with the Russell Blattner Fellowship in Pediatric Cardiology.

Dr. Laird is board certified in pediatric cardiology. He has presented research papers at numerous meetings and contributed book chapters, abstracts, and reviews for a number of publications. He is a member of the American Academy of Pediatrics, the American College of Cardiology, the American Heart Association and the Texas Medical Association. His clinical interests include fetal echocardiography, cardiac catheterization, and electrophysiology.

Penn and his wife Tracy have four young children. They are both active in their church and enjoy outdoor activities in their spare time.