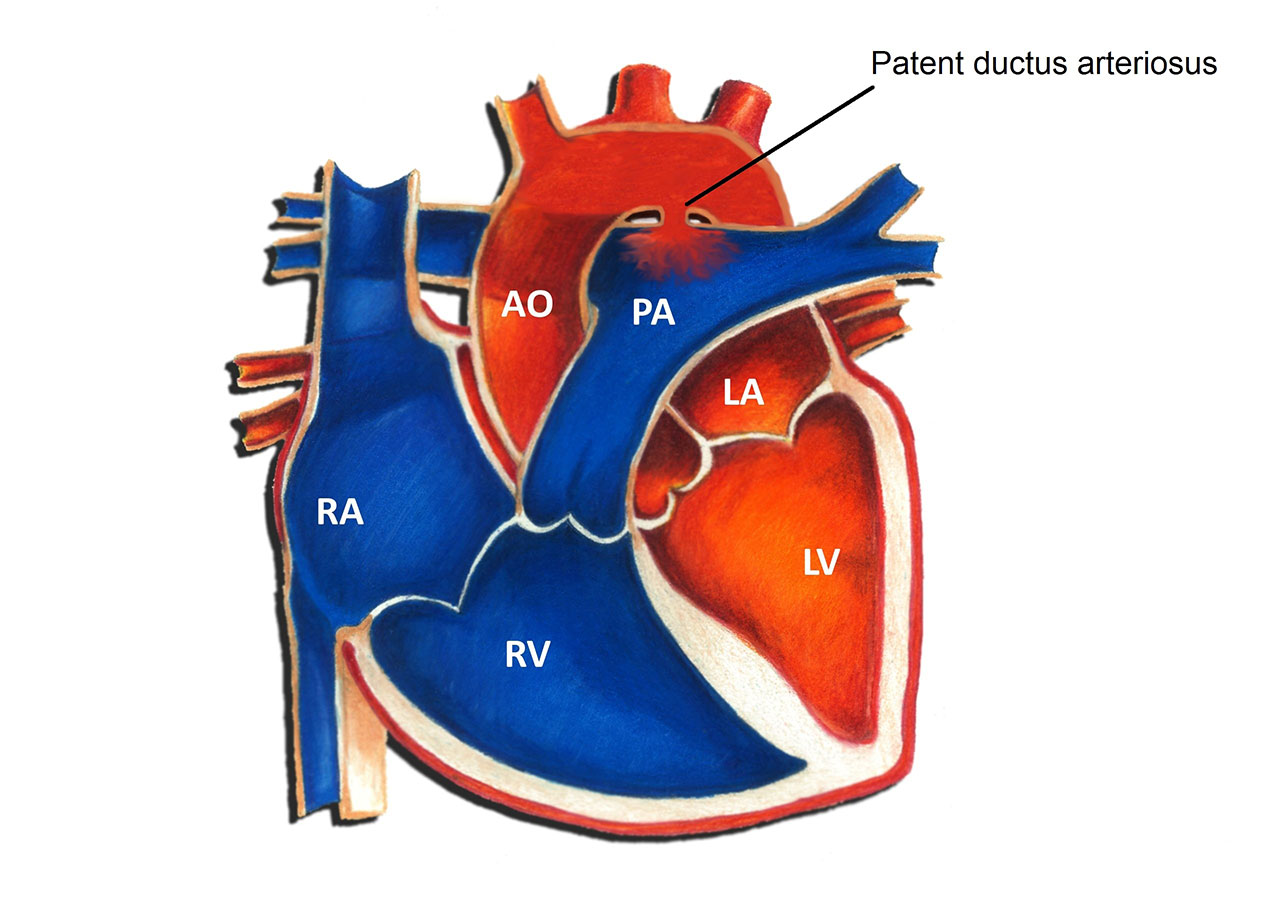 Physiologically, a PDA allows for oxygenated blood (“red blood”) to pass from the aorta backwards into the lungs. The net effect is an increase in the total amount of blood that flows to the lungs. The amount is primarily determined by the size of the PDA. A large PDA can allow for a significant increase in blood flow into the lungs; a small PDA often results in a negligible increase.

Symptoms from a PDA are related to excess blood flow to the lungs. They are usually seen in patients with large PDA's, but may be absent in the setting of moderate size defects as well. Small PDA's rarely if ever produce symptoms. In patients who develop symptoms, the most common finding is a rapid respiratory rate. This may be more obvious during times of exertion, such as feeding in an infant. Other symptoms in infants include sweating with exertion, poor feeding due to fatigue, and poor weight gain. PDA’s may also predispose to an increased risk of lung infections such as pneumonia.

Diagnosis of a PDA can be made in a number of different ways. A patient with a PDA often comes to attention due to the presence of a heart murmur. This simply refers to the sound that blood is making as it flows from the aorta into the lungs. There are many other different causes of heart murmurs, including normal causes. An echocardiogram uses sound waves to visualize the intracardiac structures and is the easiest way to diagnose the size and location of a PDA. Occasionally a heart catheterization may be necessary to assess the lung blood pressures or the amount of shunting through a PDA.

There is a wide spectrum of treatment options for a patient with a PDA. Small PDA’s detected in the first few days of life often close spontaneously. Even in cases where a small PDA remains open, specific therapy is often unnecessary. In patients with larger PDA’s who are symptomatic, medication may alleviate those symptoms. The most commonly used medicine is furosemide (Lasix), a diuretic that works by decreasing excess lung fluid caused by the extra blood flow to the lungs. Furosemide may be given anywhere from 1 to 4 times daily. Side effects are uncommon; abnormalities of electrolytes can occasionally be seen with larger doses. Another medication frequently used in the setting of a large PDA is digoxin (Lanoxin). Digoxin increases calcium levels in heart cells, thereby improving overall heart function.

Intervention to close a PDA may be necessary in selected cases. This most commonly occurs in the setting of a large or moderate size communication. Indications for intervention in infancy include symptoms unresponsive to medication, elevated blood pressure in the lungs, and significant dilation of the heart due to excess blood flow. Usually the need for intervention in infancy becomes clear by 6-12 months of age, and often much earlier. The most common form of intervention for older infants and children is “device closure” in the cardiac catheterization laboratory, as shown in the diagram below.  More information on this procedure can be found in the article titled Patent Ductus Arteriosus – Device Closure. A catheter (a long thin tube) is placed into the heart through a blood vessel in the leg. A device is then positioned in PDA, effectively closing it from the inside. In general, the procedure is both safe and effective in the vast majority of cases. Surgery for a PDA is usually reserved for premature and small infants. Surgery is equally effective as a cardiac catheterization but entails a thoracotomy scar and a longer hospital stay in most cases. 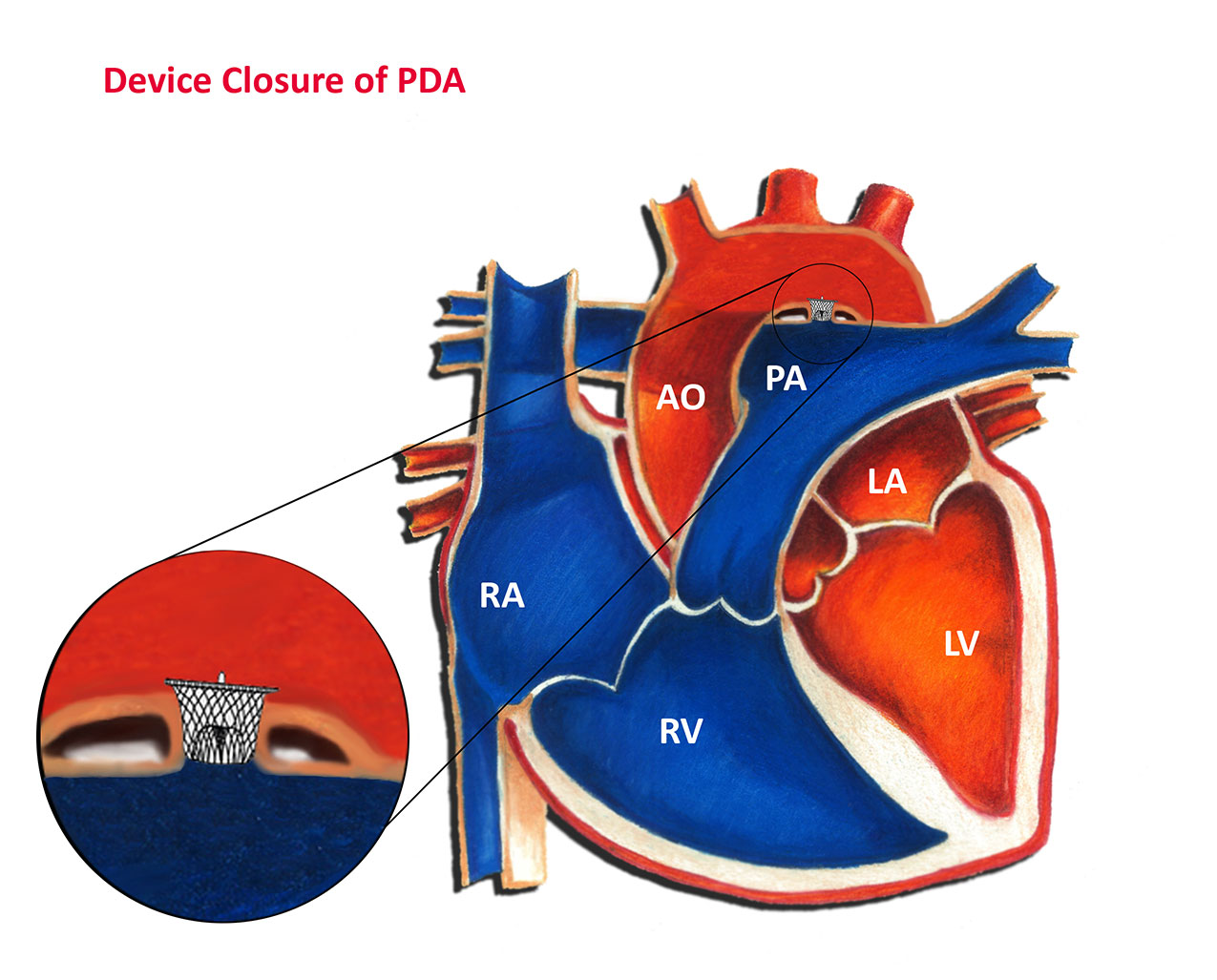 Up until recently, patients with any form of heart defect, including a patent ductus arteriosus, were recommended to use antibiotics prior to dental work or surgery to minimize the risk of heart-related infection.  However, in May 2007 the American Heart Association changed this recommendation such that now most patients with congenital heart disease, including those with a patent ductus arteriosus, no longer require this precaution.