Every time the heart squeezes it requires an electrical impulse. The impulse originates from an area in the top right corner of the heart known as the sinus node. Electricity initially spreads across the upper two chambers of the heart, and is then transmitted to the lower two chambers.  Every piece of tissue in the heart is electrically active.  All heart tissue can conduct electricity.  However, in addition, all heart tissue can generate electricity as well.  Normally the heart tissue is simply conducting electricity generated by the sinus node.  However, occasionally it will generate it as well; when this happens a premature contraction results.

A PVC is a premature contraction coming from a piece of tissue in the ventricle.  A PVC results in an electrical impulse coming earlier than expected, and in most cases causes an extra contraction of the heart.  This in and of itself is not dangerous.  In fact, almost everyone has at least a few PVC's every day! In this sense, PVC's can be considered a normal variant. Most people don't feel PVC's, although some people do seem to feel them.  Occasionally a situation will arise when an individual is having PVC's fairly frequently.  They may be happening so frequently that the doctor can appreciate them on a routine checkup.  Usually when this occurs the individual is referred for further evaluation. 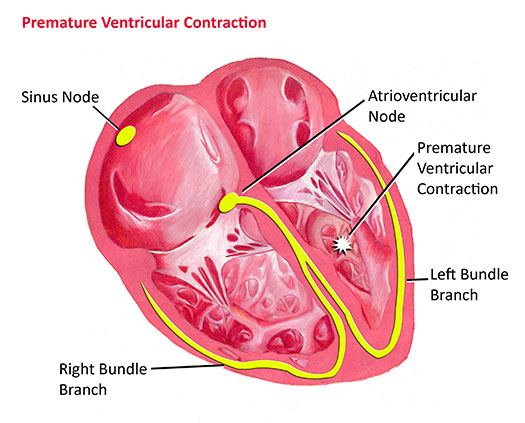 When PVC's are happening frequently, the question arises as to whether they are still a normal variant or not.  Occasionally frequent PVC's may be a marker of some type of disease process in the heart.  For example, PVC's may occur if the heart muscle is inflamed or irritated.  They may also occur if there is some type of problem with the electrical conduction system.  The job of the cardiologist is to determine whether a patient with frequent PVC's has any type of disease process that is causing them, or whether the PVC's are still normal but simply more frequent than most other people have.

Typically the evaluation of some someone with frequent PVC's involves an electrocardiogram (ECG), an echocardiogram to evaluate the appearance and function of the heart muscle, and a 24-hour recording of the heart rhythm (Holter monitor).  The Holter monitor allows the doctor to assess the frequency and pattern of PVC's over a prolonged period of time.  Provided the studies do not show any abnormalities other than isolated PVC's, usually it can be assumed that the PVC's are benign in nature, and simply more frequent than what is seen in most individuals.  The prognosis for an individual with benign PVC's is generally excellent. No special medication treatment is needed; no special activity restrictions or precautions are needed either. It is often the case that the PVC's spontaneously decrease in frequency over time.  Occasionally they may completely disappear.  However, provided the PVC's are determined to be benign, there is no danger to the heart one way or the other.