Every time the heart squeezes it requires an electrical impulse. The impulse originates from an area in the top right corner of the heart known as the sinus node. Electricity then spreads across the upper two chambers of the heart. It travels to the lower two chambers through a specialized conducting pathway known as the atrioventricular (AV) node. Normally the only way for electricity to travel from the upper to the lower chambers is through the AV node. 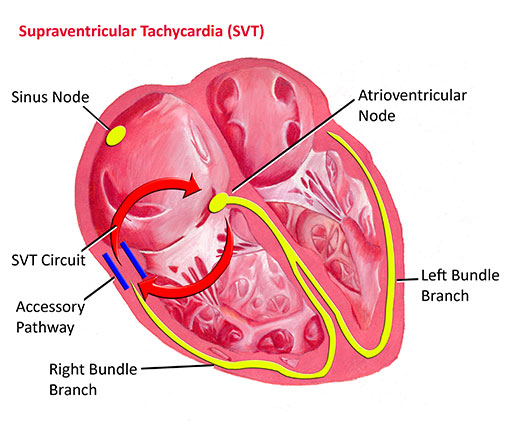 The heart rate with SVT varies based on a number of factors.  Generally it is faster in younger children.  In newborns and young infants it can be 250 to 300 beats per minute.  In older patients it is usually less than 250 and may be in the range of 180 to 200 in teenagers.  In general, the faster the heart rate, the worse the individual tends to feel.  Fortunately, SVT is very rarely life-threatening.  Most individuals complain of their heart racing but little else.  Occasionally they may feel dizzy or lightheaded.  It is fairly unusual for SVT to cause an individual to pass out. Episodes of SVT can last anywhere from a few seconds to days at a time. Children beyond the toddler age can generally verbalize that something is not right in the heart which leads to medical attention.  Occasionally in infants, SVT can go unnoticed for days and result in symptoms of heart failure.

Different maneuvers can help an individual break or terminate an episode of SVT.  One of the most useful is termed a valsalva maneuver.  A valsalva maneuver increases the pressure in the chest.  This triggers a nerve impulse which transiently slows conduction through the normal conducting pathways.  This can often break the electrical circuit and thereby stop an episode of SVT.  A valsalva maneuver can be performed in a number of ways.  The easiest way is to bear down by squatting or blowing into an occluded straw.  If these maneuvers do not work, then an individual with SVT should be taken promptly to the emergency room for further treatment.  Usually in the emergency room SVT is terminated by the use of a medicine called adenosine.  Adenosine transiently blocks conduction in the normal pathway and thus terminates the circuit.

WPW is an abnormality in which the accessory pathway can conduct electricity forward from the atria into the ventricles even in the absence of SVT.  This means that it can be diagnosed on a routine ECG.  The accessory pathway in people with “non-WPW” SVT can only conduct electricity backwards from the ventricle to the atria.  These people therefore have a normal ECG at rest.

The ability of the accessory pathway to conduct electricity forward from the atria to the ventricles presents an extra risk to people with WPW.  As these individuals enter their teenage and young adult years, there is a slightly increased incidence of atrial fibrillation.  In atrial fibrillation the atria suddenly beat very very rapidly, up to 300 to 400 times per minute.  In an individual with a normal heart, or even in one with “non-WPW” SVT, the AV node blocks a number of these impulses so that only a certain portion get through to the ventricles.  However, in people with WPW the accessory pathway is often able to conduct all of these atrial impulses through to the ventricle.  This results in an extremely fast heart rate in the ventricles which can be very dangerous. 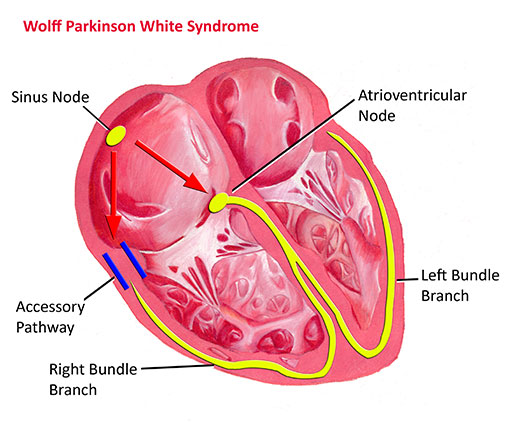 Because of this risk, most individuals with WPW need more specialized evaluation once they reach the mid teenage to early adult years, especially if they are involved in competitive athletics. This can involve testing as simple as exercise treadmill test, or as involved as a cardiac catheterization and electrophysiology study.

Younger patients with asymptomatic WPW do not require any treatment at all. For those patients that develop SVT, there are a number of different treatment options. Some patients have SVT so rarely (once or twice a year) that no treatment at all may be needed. If episodes are happening frequently, are extremely fast, or are worrisome to the patient, then treatment is usually indicated. A number of medicines have been devised to prevent SVT from starting in the first place. The most common class of medications are beta-blockers. Beta-blockers slow conduction through the normal pathways and prevent SVT from ever starting. They are about 75-90% effective in preventing SVT. Most beta-blockers have very few side effects. They are contraindicated in patients with asthma.

A potential cure for SVT and WPW can be achieved through a procedure called a radiofrequency ablation. This procedure involves a cardiac catheterization. A specialized catheter is passed through a vein in the leg into the heart. Using advanced electrical mapping techniques, the accessory pathway is located. High-frequency energy is then applied to the pathway to destroy it. Occasionally the pathway may be frozen using a technique termed cryoablation. These procedures are approximately 95% effective. In most cases there are very few if any side effects or risks.