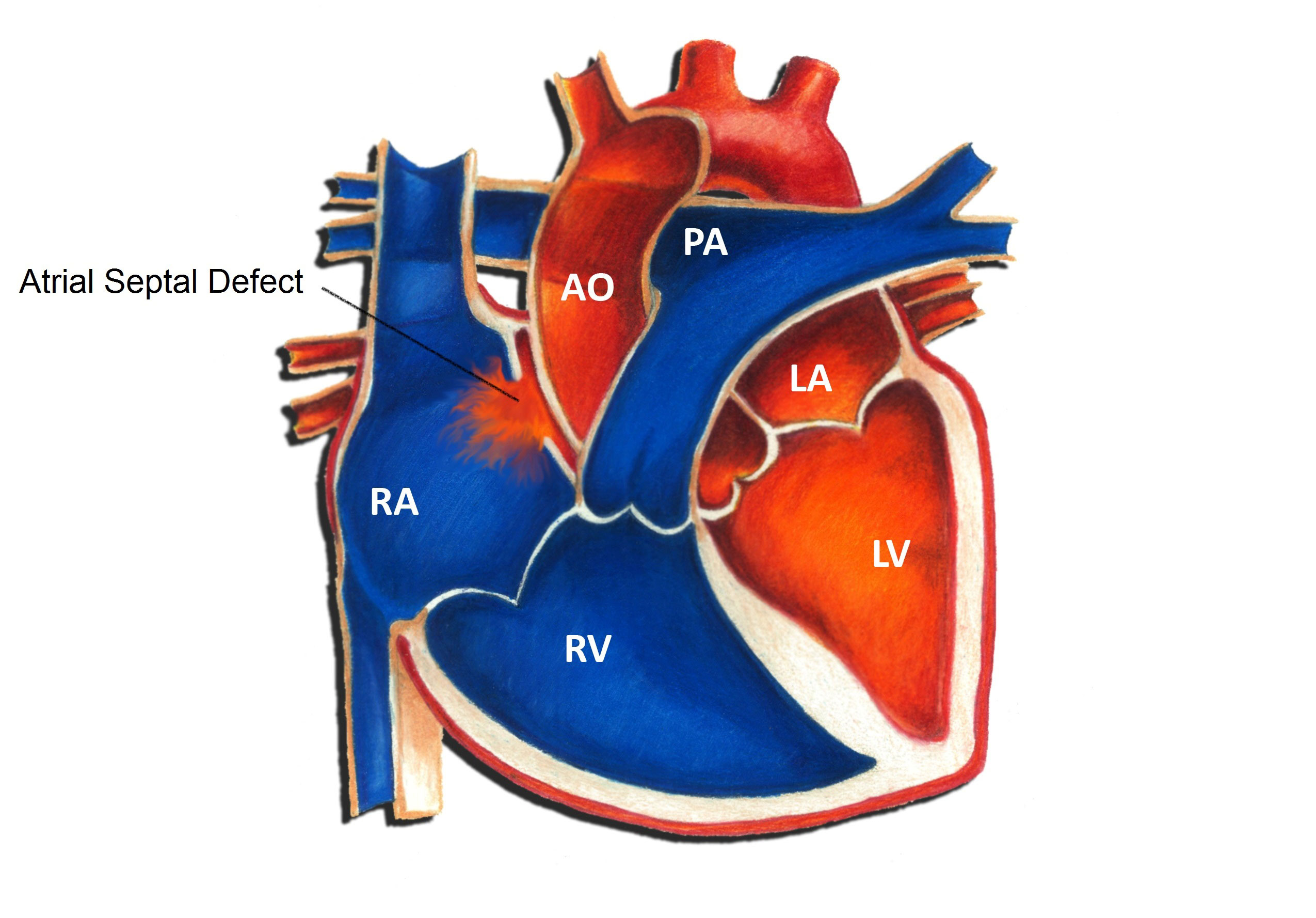 Physiologically, an ASD allows for oxygenated blood (“red blood”) to pass from the left atrium to the right atrium, join with deoxygenated blood (“blue blood”), and return to the lungs. The net effect of an ASD is therefore an increase in the total amount of blood that flows to the lungs. The amount is primarily determined by the size of the ASD. A large ASD can allow for a significant degree of blood flow to the lungs; a small ASD often results in a negligible increase.

Symptoms from an ASD are actually quite uncommon. The majority of patients, even those with very large defects, rarely have any noticeable symptoms in childhood. Occasionally infants with large ASD’s may develop a rapid respiratory rate due to excess blood flow to the lungs. This may be more obvious during times of exertion, such as feeding. Adolescents and young adults may develop fatigue with exercise. 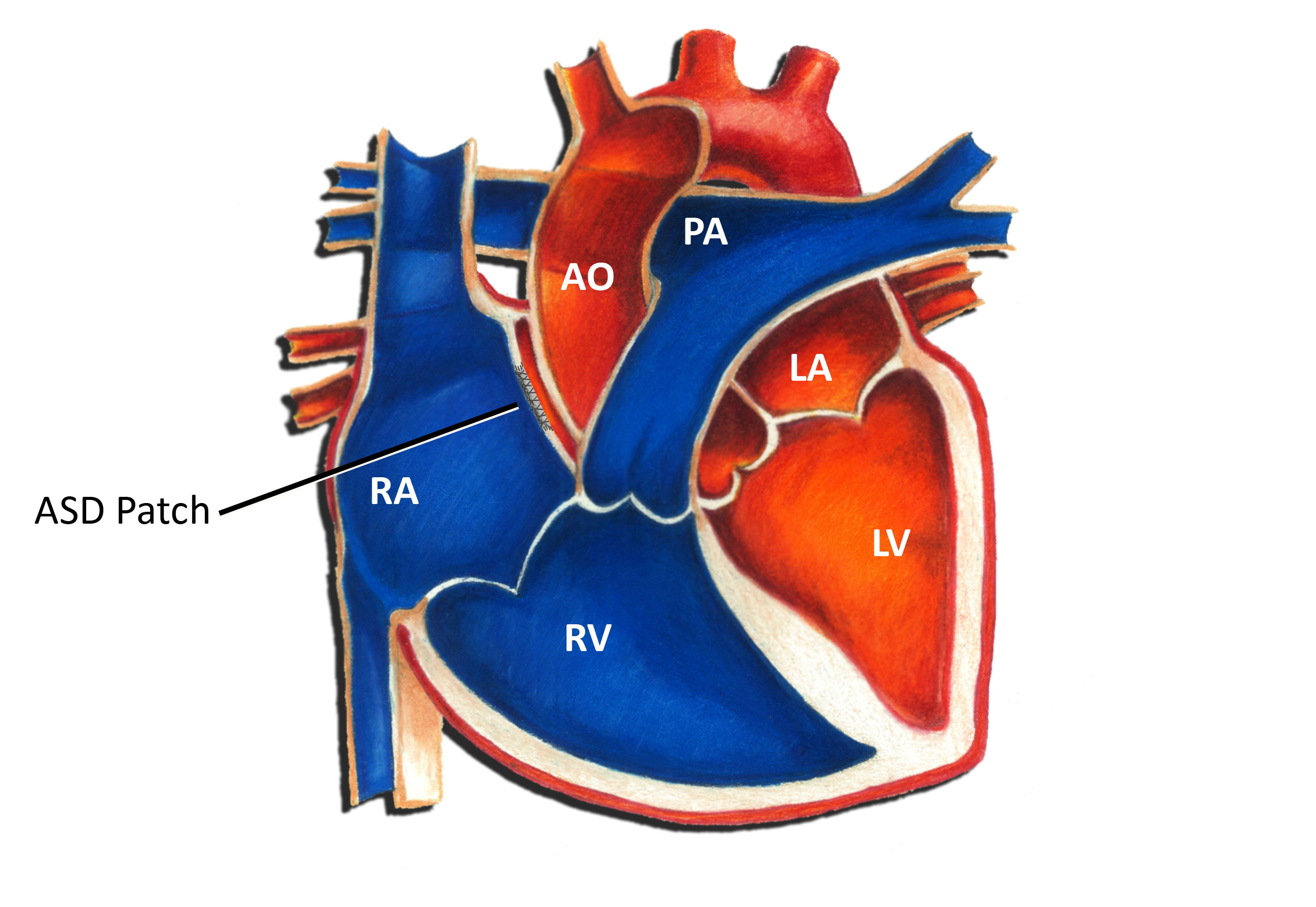 Diagnosis of an ASD can be made in a number of different ways. A patient with an ASD often comes to attention due to the presence of a heart murmur. This simply refers to the sound that blood is making as it flows through the heart. There are many other different causes of heart murmurs, including normal causes. An echocardiogram uses sound waves to visualize the intracardiac structures and is the easiest means to show the size and location of an ASD. Occasionally a heart catheterization may be necessary to assess the lung blood pressures or the amount of blood flow through an ASD.

There is a wide spectrum of treatment options for a patient with an ASD. Small ASDs detected in the first few months of life often close spontaneously. Even in cases where a small ASD remains open, specific therapy is generally not needed. Medication therapy is rarely necessary, even in the setting of large ASDs, due to the absence of symptoms in most young individuals.

Surgery is occasionally necessary to close an ASD. This often occurs in the setting of a large or moderate size defect. The most common indication for surgery is the presence of dilation of heart chambers, specifically the right ventricle, due to long-standing excess blood flow. Typically surgery is performed between 2 and 5 years of age, although it can easily be accomplished earlier if necessary. The risk of surgery for an ASD in this day and age is extremely low. The vast majority of patients do very well with no significant long term problems.  Typically a patch is sewn into place by the surgeon, effectively closing the hole, as shown in the diagram below. More information on this procedure can be found in the article titled Atrial Septal Defect - Surgical Repair. 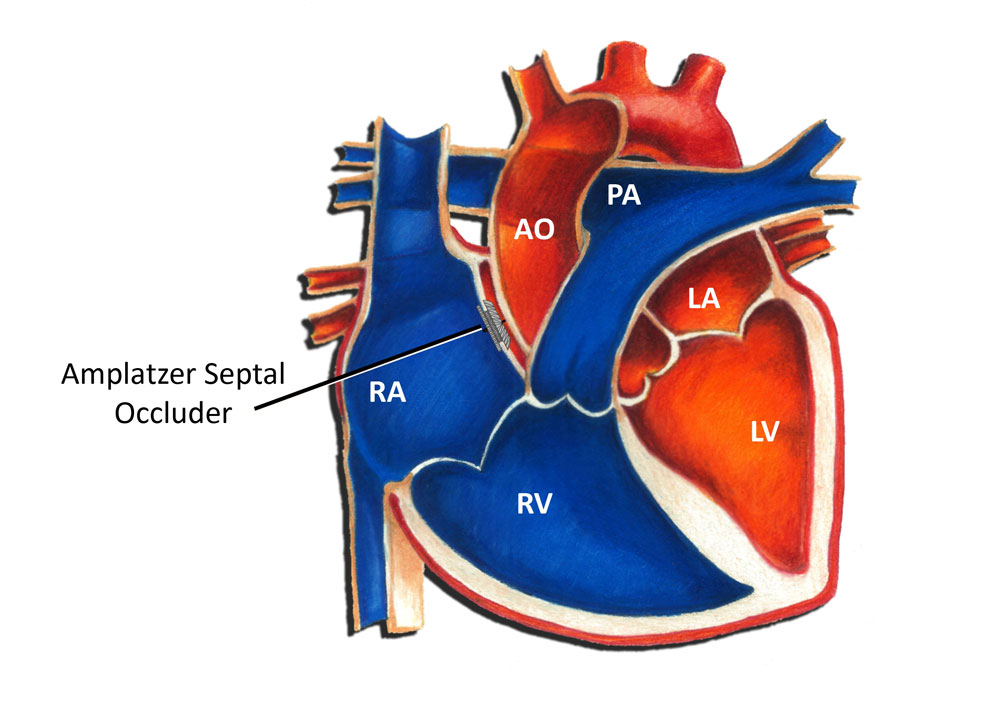 Certain patients with congenital heart defects require antibiotics prior to dental or surgical procedures to minimize the risk of heart-related infection (called “SBE prophylaxis”). This is not required for an isolated unrepaired atrial septal defect.

A relatively new procedure has been developed in the last 10-15 years for ASD closure. This involves what is termed “device closure” through a cardiac catheterization. A catheter (a long thin tube) is placed into the heart through a blood vessel in the leg. A device is then positioned in the ASD, effectively closing it from the inside. An example of using what is called an Amplatzer septal occluder is shown in the drawing below. Advantages of this procedure over surgery include less discomfort and a shorter hospital stay. Disadvantages include the lack of long term follow-up on the safety and efficacy of device closure compared with surgery. More information on this procedure can be found in the article titled Atrial Septal Defect - Device Closure.